As one of the seven instruments onboard the Lunar Reconnaissance Orbiter (LRO), the laser ranging1 (LR) system was in operation regularly for 5 years, from 30 June 2009 to 30 September 2014.
Precise knowledge of the LRO orbit is essential to take full advantage of the high-resolution data taken by the other instruments on LRO, such as the Lunar Reconnaissance Orbiter Camera (LROC), the Lunar Observer Laser Altimeter2 (LOLA), Diviner Lunar Radiometer Experiment (DLRE), and Miniature Radio Frequency Technology Demonstration (Mini-RF). The baseline tracking for LRO is provided by a NASA station in White Sands (WS1), New Mexico, and a commercial network, the Universal Space Network (USN), with up to 20 hours per day of almost continuous S-band radio frequency link to LRO. The pre-launch LRO mission requirement for the S-band tracking accuracy is 1 mm s-1 for White Sands station, and 1.5-3 mm s-1 for USN stations. With such accuracy, the spacecraft orbits can only be determined to ~10 m radially and 300 m horizontally3. To attain the precision orbit requirement of 1-m vertical accuracy and 50 to 100-m for total position4, the laser ranging system was introduced to allow an Earth laser station to take one-way time of flight measurements between the ground satellite laser ranging (SLR) station and LRO when the spacecraft is in view.

During the LRO-LR operation, the laser signals from the Earth were received by the LR telescope (LRT), which was mounted on and co-bore-sighted with the High Gain Antenna (HGA). The laser signals intercepted by the LRT were transmitted to the LOLA center detector via a bundle of fiber-optic cables (shown in the figure to the left). Of the five LOLA detectors, the center one was designed to receive both the lunar return signals and the Earth signals using common timing hardware via separate range windows that occur at a frequency of 28 Hz, and are phase-locked to the spacecraft 1-Hz Mission Elapsed Time (MET) signals. Laser ranging ground stations recorded their fire times in UTC and LOLA recorded the receive times in MET. The received times were matched with the fire times to form one-way ranges.

Led by the primary station, NASA’s NGSLR, a network of 10 SLR stations from the International Laser Ranging Service (ILRS)5, shown in the site map, provided global coverage of LRO-LR. 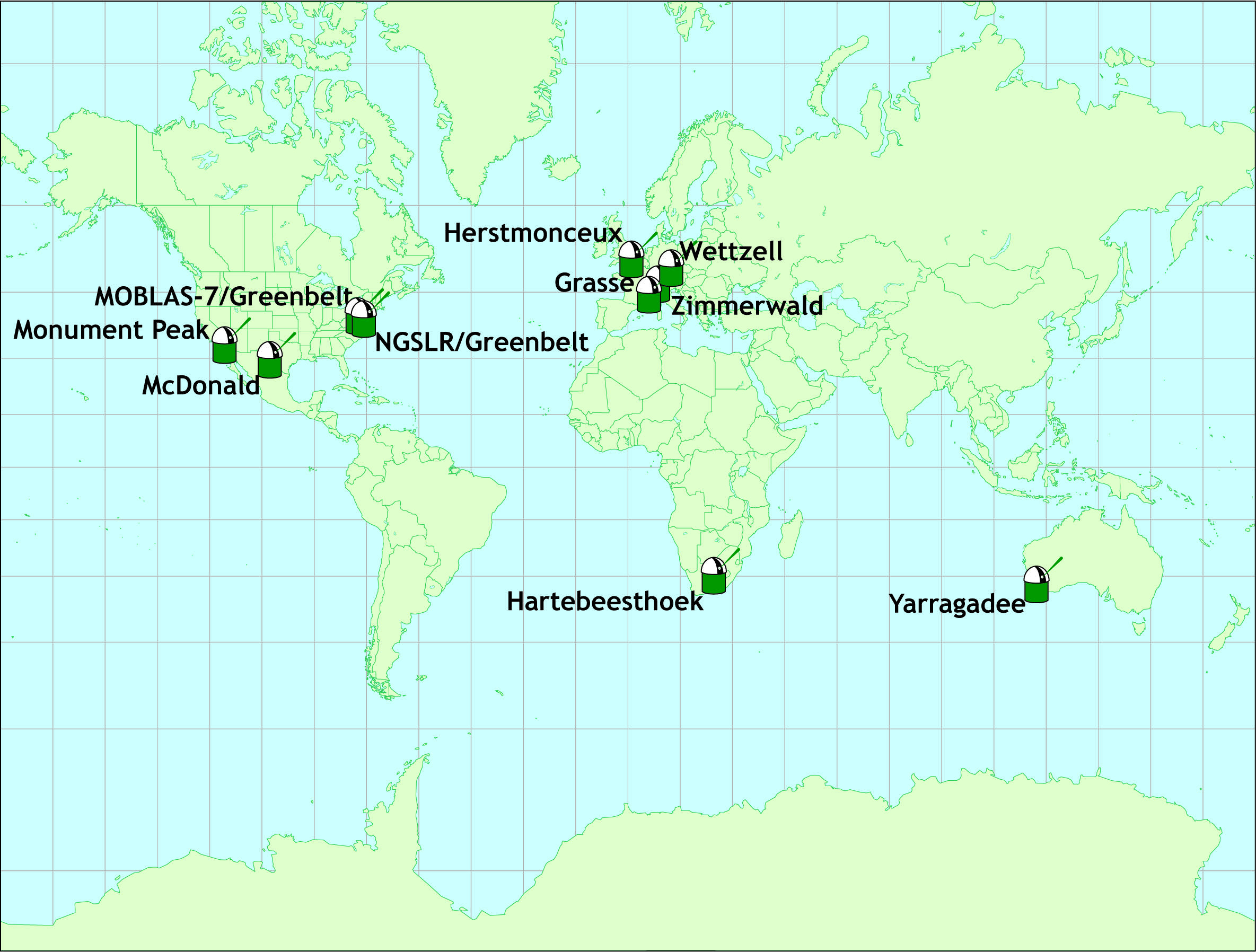 During the 62 months of LRO-LR operation, there were over 4,173 hours of successful LR tracking data recorded at LOLA from the 10 participating ground stations. The number of minutes and the percentage of total data for each station are given in the pie chart below. The LRO-LR experiment demonstrated operational laser ranging over this 5-year period to a target orbiting a body other than Earth, demonstrating the ILRS Network can provide close to 24-hour coverage for laser ranging to targets beyond Earth.
In addition to the nominal single-station ranging, simultaneous ranging to LRO by two or more stations was scheduled and achieved regularly during the LRO-LR operation. Simultaneous ranging provided the Science Team with additional information to determine measurement biases, and enabled time transfer between clocks located at different ground stations. Three-way simultaneous ranging can potentially provide a geometric solution of the spacecraft position after correction for biases6. 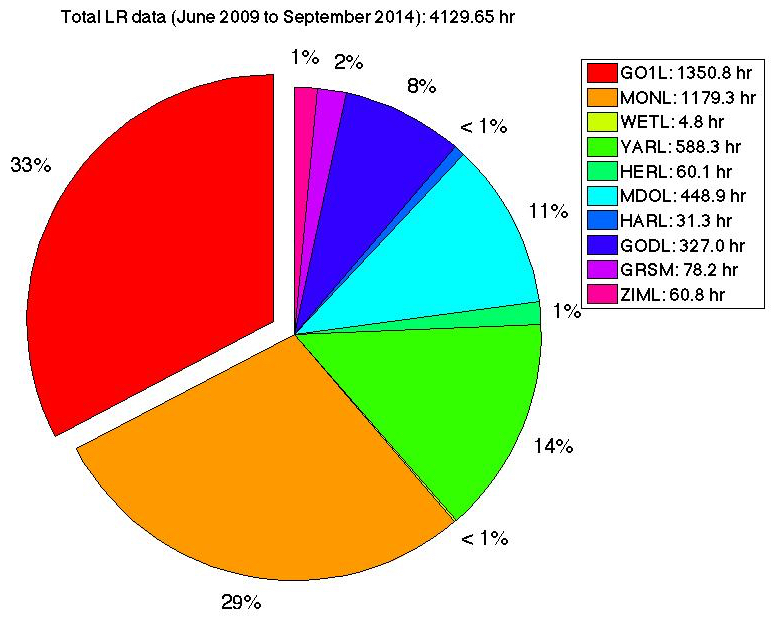 To pair up the LOLA received LR times to corresponding ground SLR station transmit times, a time of flight was calculated for each out-going laser pulse using the ground station location and a definitive LRO ephemeris provided by GSFC’s Flight Dynamics Facility (FDF). After removing the calculated light time and a polynomial function modeling the LRO orbit from the difference of LOLA receive time and the ground laser fire time, the residuals of a successfully matched LR pass usually yielded an RMS value ranging from 10 to 50 cm, depending on the laser properties of the ground station. A ground system dependent range walk correction was also applied in the matching process to improve data accuracy. To reduce data noise 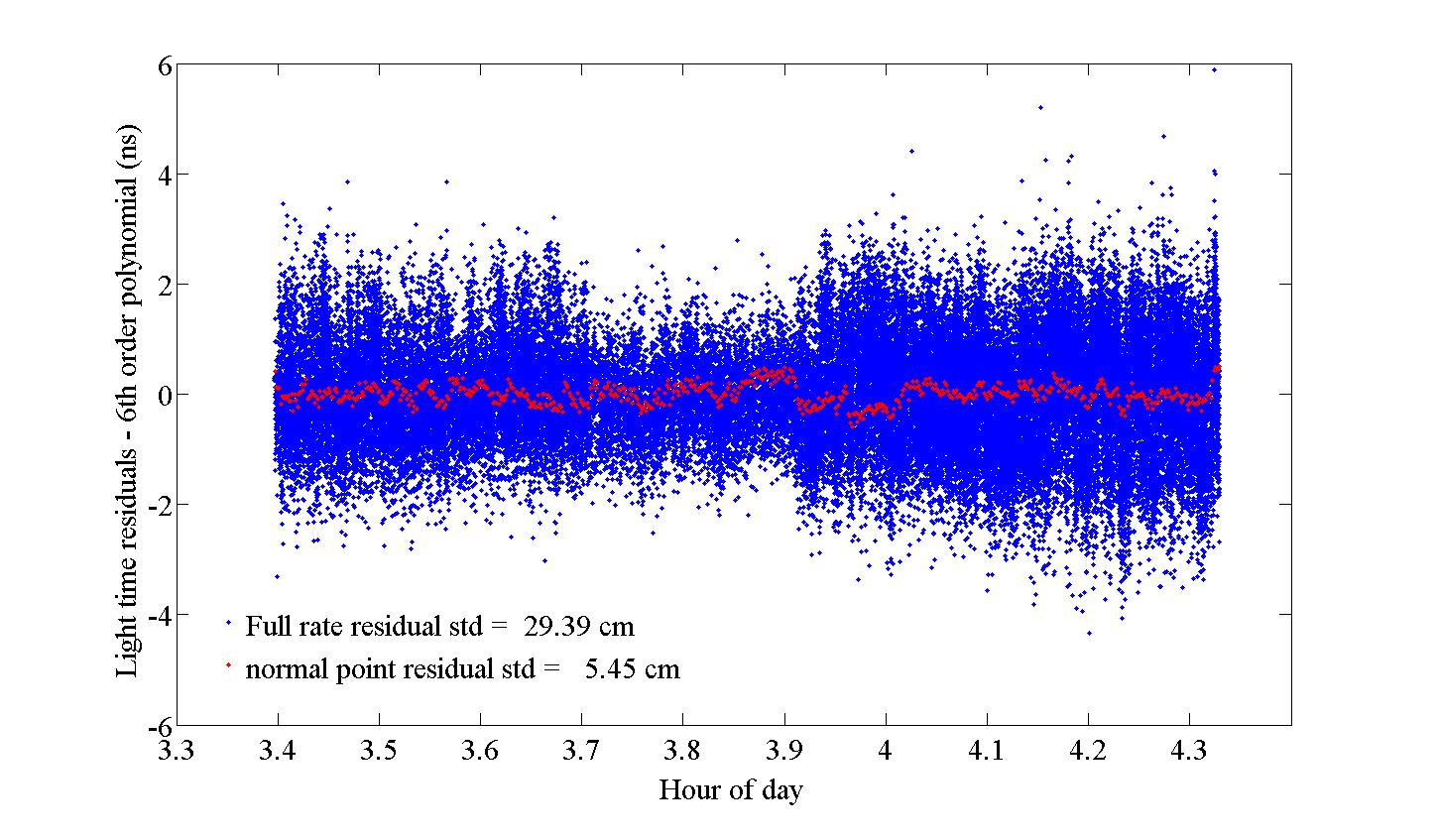 normal points were formed every 5 seconds from the full rate data, based on the ILRS normal point algorithm7. The RMS value of the light time residual for normal points was nominally 1 to 5 cm. Figure to the right shows an example of NGSLR full rate and normal point light time residuals from a matched 60-minute long pass. Both the full-rate and normal point data products can be downloaded from the Planetary Data System (PDS) Geosciences Node:
http://pds-geosciences.wustl.edu/lro/lro-l-rss-1-tracking-v1/lrors_0001/data/range/
The LR full-rate and normal point data products follow the ILRS Consolidated Laser Ranging Data Format (CRD)8. Each data file includes 3 separate sections: the header section, the configuration records section, and the data records section. The header section contains information about the ground station (name, time reference, etc.), the target (name, type, time reference, etc.), and some information related to the data in the file (start and end time, data type, corrections applied, etc.). The first field of each record in the header section starts with H, or h and a one-digit integer.  The configuration records hold static data representing station specific configuration information used while collecting the data stored in the file. Detailed and significant ground system information can be found in this section, such as the laser configuration data (laser type, transmit wavelength, fire rate, pulse-width, pulse energy, etc.), the timing system configuration data (time source, frequency source, delay correction applied, etc.). The first field of each record in the configuration section starts with C, or c and a one-digit integer. The data records section contains dynamic data. The ground laser transmit times in UTC seconds of day provided by the SLR ground stations (second column), and the corresponding LOLA receive times in MET seconds of day (third column), are listed in this section. The receive times are derived from the LOLA EDR/RDR data products, which are available at PDS data archive: http://pds-geosciences.wustl.edu/missions/lro/lola.htm.
A set of meteorological data are also included in the data record section, including the surface pressure, the surface temperature, and the relative humidity at surface. In the full-rate files, the received pulse-width are included in the last column in addition to the laser transmit and receive times. In the normal point files, some extra information about each normal point is listed after the time tags, such as the window length, the number of raw ranges compressed into the normal point, the bin RMS, the bin skew, the bin kurtosis, the bin peak, etc.  The first field of each line in the data section is a two-digit integer, such as 20 for meteorological data, 10 for full rate data, and 11 for normal points.

As a unique and new dataset, LR data have been used in LRO orbit determination process, and to characterize the LRO spacecraft clock’s mid- to long-term behavior9. The results suggest that the LR data alone can determine LRO orbits with quality comparable to those from S-band data when a high-resolution gravity field model, such as those derived from the GRAIL spacecraft10,11, are used. Furthermore, combining LR and S-band data showed great improvement in the radial direction for the spacecraft orbit from results obtained with radiometric data alone.
The LOLA timing reference is based on a 20 MHz ultra stable oscillator (USO) onboard LRO. The LR data have been used to monitor the mid- to long-term characteristics behavior of the USO since the LRO launch. Pre-launch ground testing indicated the clock had a frequency of approximately 1.00000007659 seconds per 1-s clock tick. The results from LR showed that the clock has been slowing down gradually and steadily over the entire mission. Using data from the primary LR station, the spacecraft clock was monitored to better than 0.015 ms during the entire LR 5-year operations. This result is much better than the 3 ms mission requirement.
In addition to enabling a new measurement using existing SLR infrastructures, which can complement and potentially replace radiometric tracking in the future, the LRO-LR system provides a platform to demonstrate some deep space ranging technologies and test new mission concepts. For example, on March 26, 2012, a 200×152-pixel 12-bit (4096) gray scale image of the Mona Lisa was 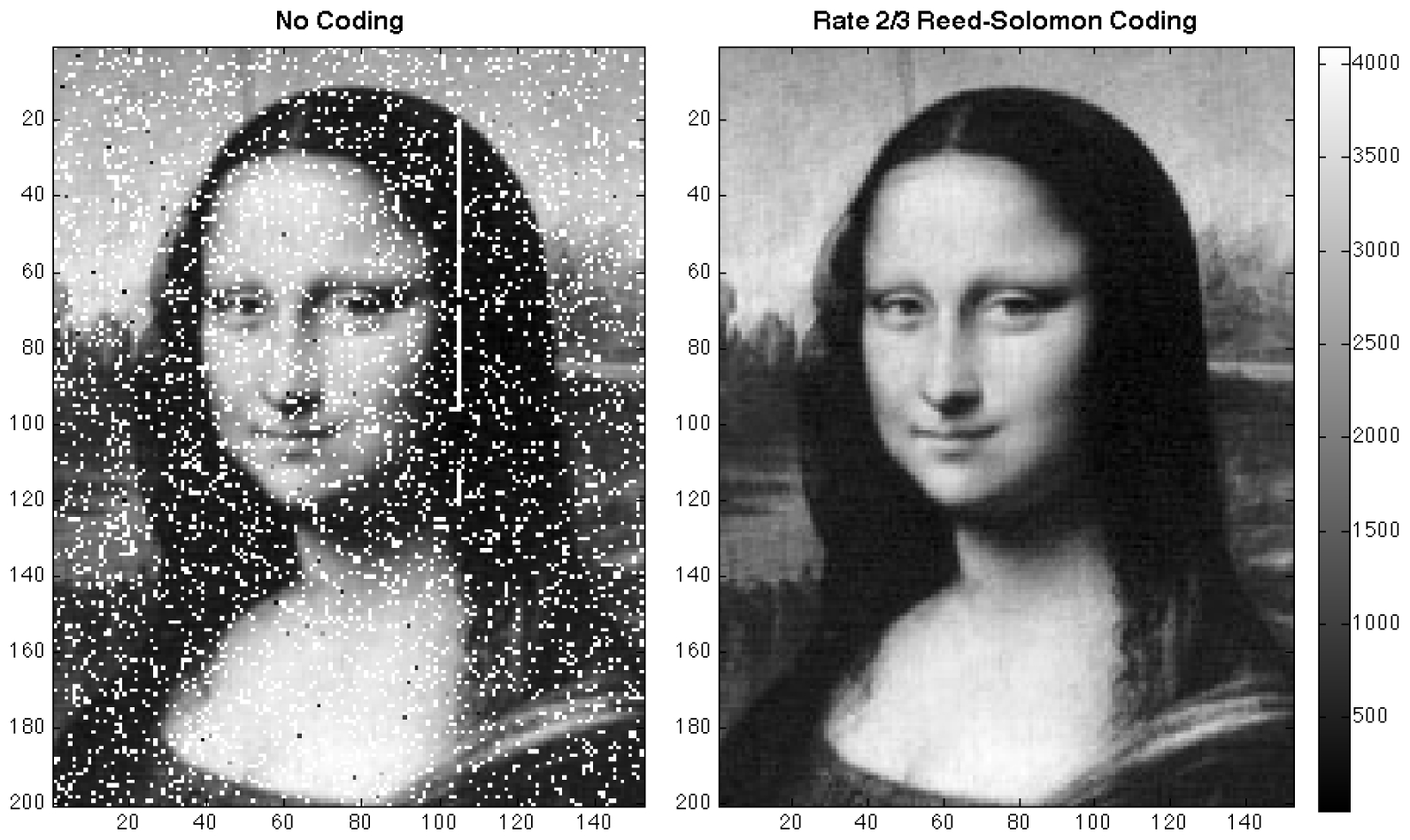 successfully transmitted to LRO from the laser station at GGAO via the LR uplink. Figure to the left  shows the images received by LRO without (left) and with (right) error correcting coding. This experiment demonstrated a useful technique for performing a simultaneous laser tracking and data communication to a spacecraft in deep space from existing SLR stations as an alternative to the conventional microwave links12.
In 2013 and 2014, multiple tests were conducted to transfer time between two SLR stations at GGAO via simultaneous LR operation to LRO13,14. The purpose of the time transfer was to bring multiple stations to the same precise time reference. The success of these tests verified that nanosecond precision of time transfer is achievable and can be stable for over a year.