In addition to its normal altimetric ranging capabilities, LOLA measures the lunar surface reflectance with two complementary methods. In the first, called active radiometry, the ratio of the return pulse energy to the transmitted energy gives the reflectance at zero phase angle, called the normal albedo. The normal albedo is a very useful quantity, in part because it is independent of viewing and illumination geometry (characterized by the incidence and emission angles). The active radiometry has proven crucial in the hunt for polar volatiles (e.g., Lucey et al. 2014; Fisher et al. 2017) and for studying the effects of space weathering (e.g., Hemingway et al. 2015; Lemelin et al. 2016).

In the second reflectance measurement method, called passive radiometry, LOLA collects solar photons reflected off the lunar surface yielding the albedo at phase angles larger than zero and multiple viewing/illumination geometries. The passive radiometry is useful in studying the reflectance behavior of the lunar surface, often referred to as the phase function, which depends on surface microphysical properties like chemical and mineralogical composition, surface roughness, porosity, grain size, grain asperities, etc. LOLA is unique because it can measure both the normal albedo and the phase function giving a more complete insight on the reflectance behavior and regolith characteristics than typical imagers.

Here we provide the first year of passive radiometry data whose calibration and analysis were published in Barker et al. (2016). Please read that paper and the documentation on this website for full details. Future releases with more data using new and improved calibrations are planned.

The passive radiometry data files (PRADRs) are split up by orbit and organized by mission phase. Most users will want only columns 1 - 4 of the PRADR: (1) TDT time, (2) longitude, (3) latitude, (4) radiance at 1064-nm in units of W/m2/um/sr. To convert the radiance to radiance factor (as in Figure 1), the user must multiply by pi and divide by the solar irradiance at 1064-nm at the time of the observation, which depends on the Sun-Moon distance. 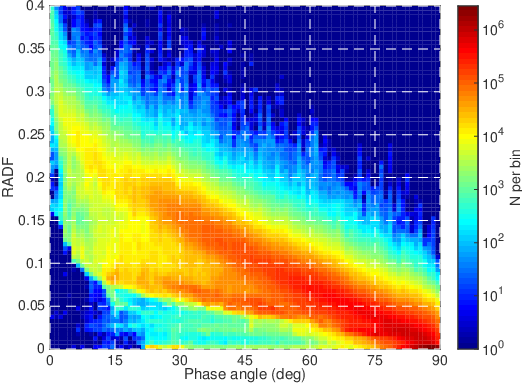 Figure 1 - 2-dimensional histogram of radiance factor for this dataset. The upper and lower sequence are the highlands and maria, respectively.

Please acknowledge use of this dataset by referencing Barker et al. (2016).