The Contribution of Small Impact Craters to Lunar Polar Wander

Why are the degree-2 gravity coefficients important? These coefficients have a direct relationship with the components of the moment of inertia tensor; a quantity that is used to describe the mass distribution along three orthogonal axes. For a spinning body, the preferred orientation is one in which the energy to maintain its spin is minimum, i.e., the spin axis aligned along the axis of maximum moment of inertia. Any change to the distribution of mass (e.g., from a cratering event) perturbs this rotational state and causes the body to reorient in space to realign its new axis of maximum moment of inertia with the rotational axis. During this reorientation, the rotational axis remains fixed in inertial space but re-orients the body and surface relative to the rotational axis. Thus, the geographical location of the rotational axis “wanders” with respect to the surface. This type of planetary reorientation, called true polar wander, is known to have occurred for several planetary bodies in our solar system, including the Moon (see review by Matsuyama et al. 2014)

We investigated the contribution of 5197 craters and basins to the Moon's degree-2 gravitational shape and derived the Moon's polar wander path over ~4.25 billion years. We performed the polar wander analysis in three steps:

First, we generate the models of craters and basins based on a sequential modeling technique, mapped directly from the GRGM1200B GRAIL gravity field of Goossens et al. 2020. Second, these models were arranged in an ensemble of time-ordered sequences consistent with the best-known cratering chronology. Third, the contributions of the craters and basins to the Moon's moment of inertia tensor are sequentially subtracted and the Moon is reoriented at each step. Our sequential methodology is novel, as it considers a) the cratering and reorientation history and their combined influence on the polar wander path taken by the Moon from its present-day pole position to its paleopole at ~4.25 Ga, and b) modifications of the final paleopole due to changes in the strength of equilibrium rotational and tidal bulges from the Moon's tidal recession; i.e., if a crater impacts at a time when the Moon had a faster spin and closer distance to the Earth, it would have to overcome a higher rotational stability than if the same crater had impacted at times of slower spin and lower tidal interaction and associated lower rotational stability (here stability refers to the increased resistance to polar wander due to the action of the tidal and rotational bulges). During polar wander, the relative location of a crater changes with respect to the instantaneous equilibrium rotational and tidal bulges due to the (partial) readjustment of these bulges after the reorientation caused by an earlier crater in the sequence. Thus we evaluate the contribution of each crater and basin based on this relative location, taken at the time of impact. The relative distance between craters remains fixed due to the absence of any observed surface plate tectonics on the Moon. The three-step process enables us to determine the Moon's polar wander path with associated geological time stamps as shown below. 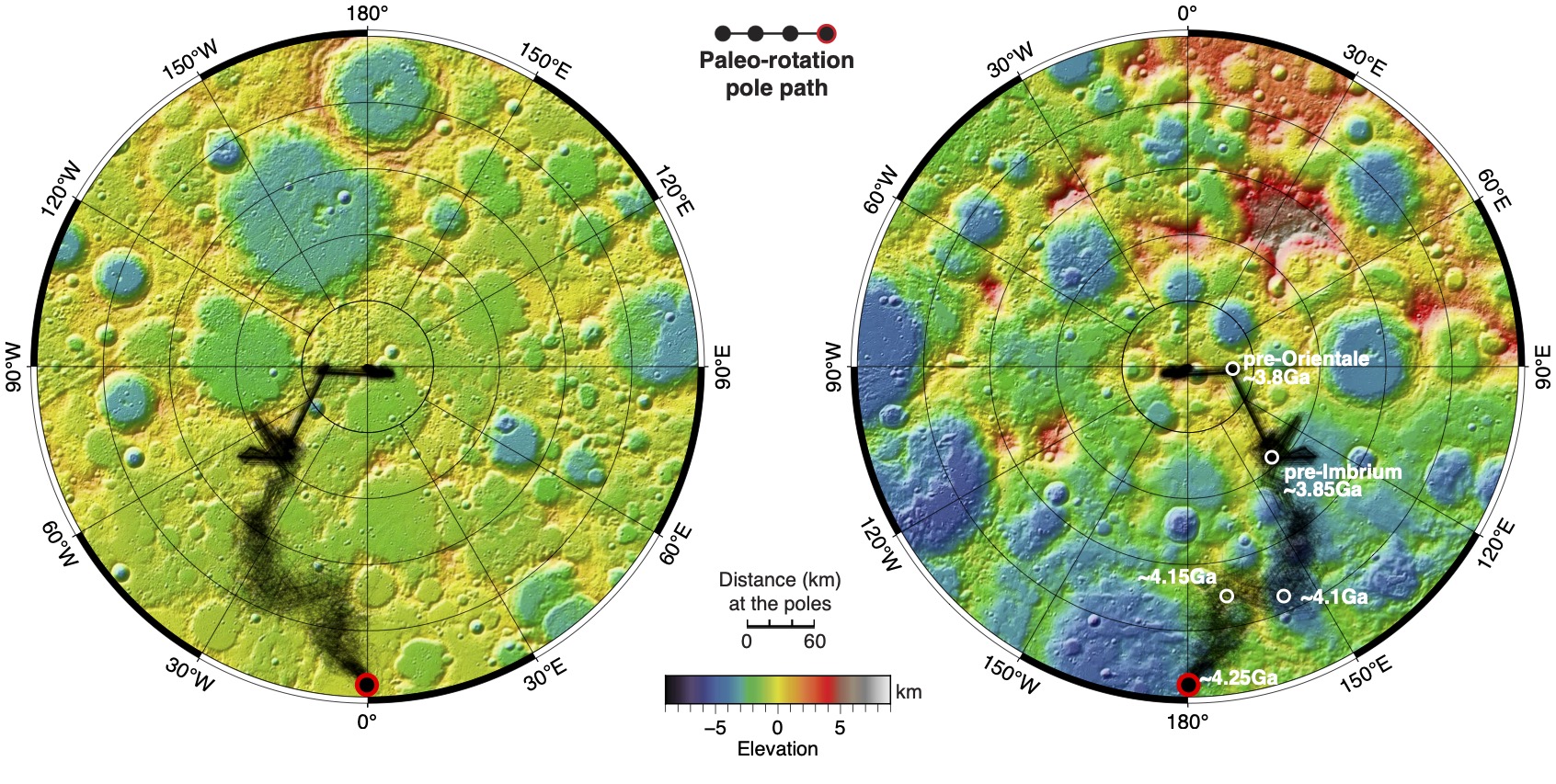 Our results show that the abundance and non-uniform distribution of 20-200 km diameter craters make them a critical contributor to the polar wander. When these smaller craters are included in the analysis, we find:

- A net displacement of the Moon's pole by ~10 degrees in latitude in the general direction of the present-day Earth-Moon tidal axis with the paleopole coordinates post SPA at ~80°N/S, 0/180°E.

- Most of this true polar wander occurs post-SPA in the Late Nectarian and Early Imbrian Period (pre-Orientale) (Figure 1) and places the post-SPA south pole on the edge of the ~140 km diameter De Forest crater located at 80.8°S, 191.2°E.

- The geographic location of this paleopole along the Earth-Moon tidal axis implies that the current near-side Procellarum region was ~10° higher in latitude than it is today, placing the Th-rich deposits and their antipode closer to the poles.

- Since the Orientale impact, the pole has only moved ~10% of its full latitude change since post-SPA and has passed through the Shackleton crater before arriving at its present-day location. This suggests that the polar cold traps could have been relatively stable for polar volatile accumulation since the beginning of the Late Imbrian provided there has been little change in the lunar obliquity during that time. This also implies that any volatiles released by post-Orientale basin volcanism and reaching polar cold traps would be sequestered in any crater existing at that time in the current circumpolar region including some presently at latitude ~75°S.

The datasets associated with this study are provided below. If using these data, please cite Smith et al. (2022).


Some of the results above were discussed in press releases.


The NASA GSFC Science Visualization Studio produced some movies to illustrate the movement of the pole.