The analysis of the radio science data of the MErcury Surface, Space Environment, GEochemestry, and Ranging (MESSENGER) mission allowed us to retrieve high-resolution maps of Mercury’s gravity anomalies and crustal thickness in the northern hemisphere. The new gravity solution, HgM008, shows substantial improvements in both short- and long-wavelength gravitational field coefficients compared with previous studies. We applied a novel precision orbit determination (POD) technique to the entire MESSENGER radio  science dataset to determine a comprehensive set of geophysical parameters (e.g., pole’s orientation) including the gravity field.
The combination of the free-air gravity anomalies and the topography measured by the Mercury Laser Altimeter (MLA) enabled the computation of the crustal thickness variations. The enhanced resolution of the crustal thickness map in northern hemisphere helps a better understanding of the processes that led the formation of specific geological features (e.g., Northern Rise).
Our gravity solution also provides information on the gravitational tides of Mercury by measuring the Love number k2. This geophysical parameter is significantly larger than previous estimates. The latest estimate of k2 indicates a warm and weak mantle.

The MESSENGER spacecraft orbited Mercury for more than 4 years after ∼7 years of interplanetary cruise and a complex series of planetary flybys including three around Mercury on 14 January 2008, 6 October 2008, and 29 September 2009. Its mapping phase started on 18 March 2011 in a highly eccentric near polar orbit with a 12-h period and a periapsis at 200 km altitude and ∼60°N latitude.
This orbit configuration was not stable since a significant drift of the periapsis altitude and latitude was caused by the third-body perturbation of the Sun. Therefore, orbit-correction maneuvers (OCMs) were periodically performed to reconfigure the spacecraft orbit.  During the first year in orbit the periapsis reached 500-km altitude and high northern latitudes. A first mission extension began in March 2012 and enabled a second year of science operations. In April 2012, the orbital period was reduced to ∼8 h, yielding three closest approaches to the planet per day.
A second extended mission (XM2) started in March 2013, and the second year of XM2 included a low-altitude campaign that continued until the spacecraft’s impact onto Mercury’s surface on 30 April 2015. Beginning in March 2013, the spacecraft orbital configuration led to a progressive decrease in the periapsis altitude with each successive orbit, and fuel reserves were used to raise the minimum altitude in multiple OCMs. The periapsis altitude was as low as 15±25 km for several weeks.

One of the instruments onboard the MESSENGER spacecraft was the radio frequency telecommunications subsystem for the radio science investigation. This system enabled precise radio tracking data at X-Band frequencies (7.2 GHz uplink, 8.4 GHz downlink) to measure spacecraft relative position (range) and velocity (range-rate) to the Deep Space Network (DSN) stations.
The accuracy of the radio tracking data depends mainly on solar plasma and thermal noise effects. MESSENGER used three different kinds of onboard fixed antennas (low-gain, medium-gain fanbeam, and phased-array high-gain antennas) for radio communications to the DSN stations, and the thermal noise effects differed across antennas (Srinivasan et al., 2007). However, the largest source of error was the dispersion caused by plasma scintillation (Iess et al., 2014). The plasma noise markedly increased near superior solar conjunctions. For this reason, the data collected at Sun-probe-Earth (SPE) angles less than 35º were not included in our solution.
The resolution of the resulting gravity anomaly map relies substantially on the level of noise of the radio tracking data. However, improved measurements of the gravity anomalies with the same radio science system are possible by decreasing the altitude of the spacecraft in order to be more sensitive to the shorter-wavelength components of the gravity field. The low-altitude campaign of the MESSENGER mission enabled the acquisition of radio tracking passages from April to October 2014, leading to gravity measurements at altitudes between 25 and 100 km. Figure 1 shows the evolution of the periapsis altitude and argument of periapsis during MESSENGER’s orbital mission. Different colors represent the orbit configuration of the MESSENGER spacecraft for the periods covered by our previous gravity solutions.  HgM002, HgM004, and HgM005 were retrieved with data before the low-altitude campaign showing lower resolution compared to HgM008. The other solution archived on the Planetary Data System (PDS), HgM007, is based on the entire MESSENGER dataset. However, our latest solution HgM008 enabled significant improvements in the retrieval of Mercury’s gravity field by using a novel technique for orbit determination. 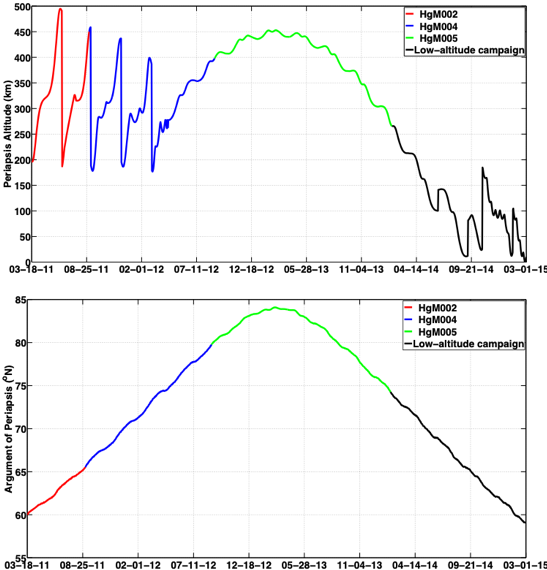 Figure 1. Periapsis altitude (top) and argument of periapsis (bottom) of the MESSENGER spacecraft from 18 March 2011 to 30 April 2015. Different colors show periods covered by our previous gravity solutions, and the low-altitude campaign (black).

Our analysis of the MESSENGER radio tracking data is based on an innovative technique that consists of the simultaneous numerical integration of both the spacecraft and planet equations of motion in order to determine parameters related to MESSENGER and Mercury orbital dynamics. The NASA Goddard Space Flight Center (GSFC) orbit determination software GEODYN II (Pavlis et al., 2013) was modified to numerically integrate both orbits simultaneously. Previous Mercury gravity solutions (Mazarico et al., 2014; Verma and Margot, 2016) were retrieved by adopting pre-converged ephemeris of the planet. For this study we integrated Mercury’s ephemeris continuously from the initial epoch of MESSENGER’s first flyby by modeling the solar system with all the planets (including the Moon) and 343 main belt asteroids (Folkner, 2014).

The combined integration of spacecraft and central-body trajectories allowed us to estimate parameters related to geophysics, heliophysics and fundamental physics. Mercury’s ephemeris provided crucial information on testing Einstein’s theory of General Relativity and the solar system expansion due to the solar mass loss rate (see more here). The reconstruction of MESSENGER orbital dynamics around Mercury allowed us to determine the geophysical parameters including the gravity field, orientation of the pole, and gravitational tides.

The gravity field HgM008 is expressed in spherical harmonics and expanded to degree and order 100. This solution also includes an accurate estimation of the gravitational tides Love number k2 and of the pole orientation (right ascension and declination). The gravitational potential Love number k2 in the HgM008 solution is 0.5690±0.025 (the uncertainty encompasses variations among different solutions rather than only statistical error). This value is larger than previous estimates (Mazarico et al., 2014; Verma and Margot, 2016) indicating a warm and weak mantle, rather than a cold and rigid mantle or the presence of a solid FeS layer at the top of the core, as suggested previously (Hauck et al., 2013; Padovan et al., 2014). The accurate measurement of pole’s orientation enabled a more accurate computation of Mercury’s polar moment of inertia that supports the presence of a large solid inner core.
An improved resolution of the gravity field is fundamental to investigate the crust of Mercury. Refinements in the short-wavelength gravity field coefficients of the HgM008 solution stand out in the map of the free-air gravity anomalies (Figure 2), which are reported over shaded topographic relief.

Figure 2. Map of free-air gravity anomaly (mGal) of the gravity field HgM008 shown over shaded topographic relief in a Mollweide projection for the entire planet.

By assuming a homogenous crustal density ?c=2800 kg m-3 that accounts for macroscale porosity of near-surface material similar to that observed at the Moon (Wieczorek et al., 2013) and Mars (Goossens et al., 2017), we derived Bouguer gravity anomalies that are the results of variations in the depth to the crust–mantle boundary. For a crust–mantle density contrast of 400 kg m-3 and an average crustal thickness of 35 km (James et al., 2015; Padovan et al., 2015), the distribution of crustal thickness is as shown in Figures 3. The crustal thickness map was computed with finite-amplitude corrections from the gravitational and topographic fields in the spherical harmonic degree range 2 to 60.

Figure 3. Map of the crustal thickness (km) computed by using the gravity field HgM008 and the MLA topography, shown over shaded topographic relief in a Mollweide projection for the entire planet.


The Mercury gravity solution HgM008 is presented in the following paper:

Please cite this manuscript if using the HgM008 gravity field and/or its derived products.
The gravity field coefficients and associated covariance matrix are available below, and are also archived on the NASA PDS Geosciences node.


The MESSENGER trajectory is available from this SPICE kernel (∼400MB). 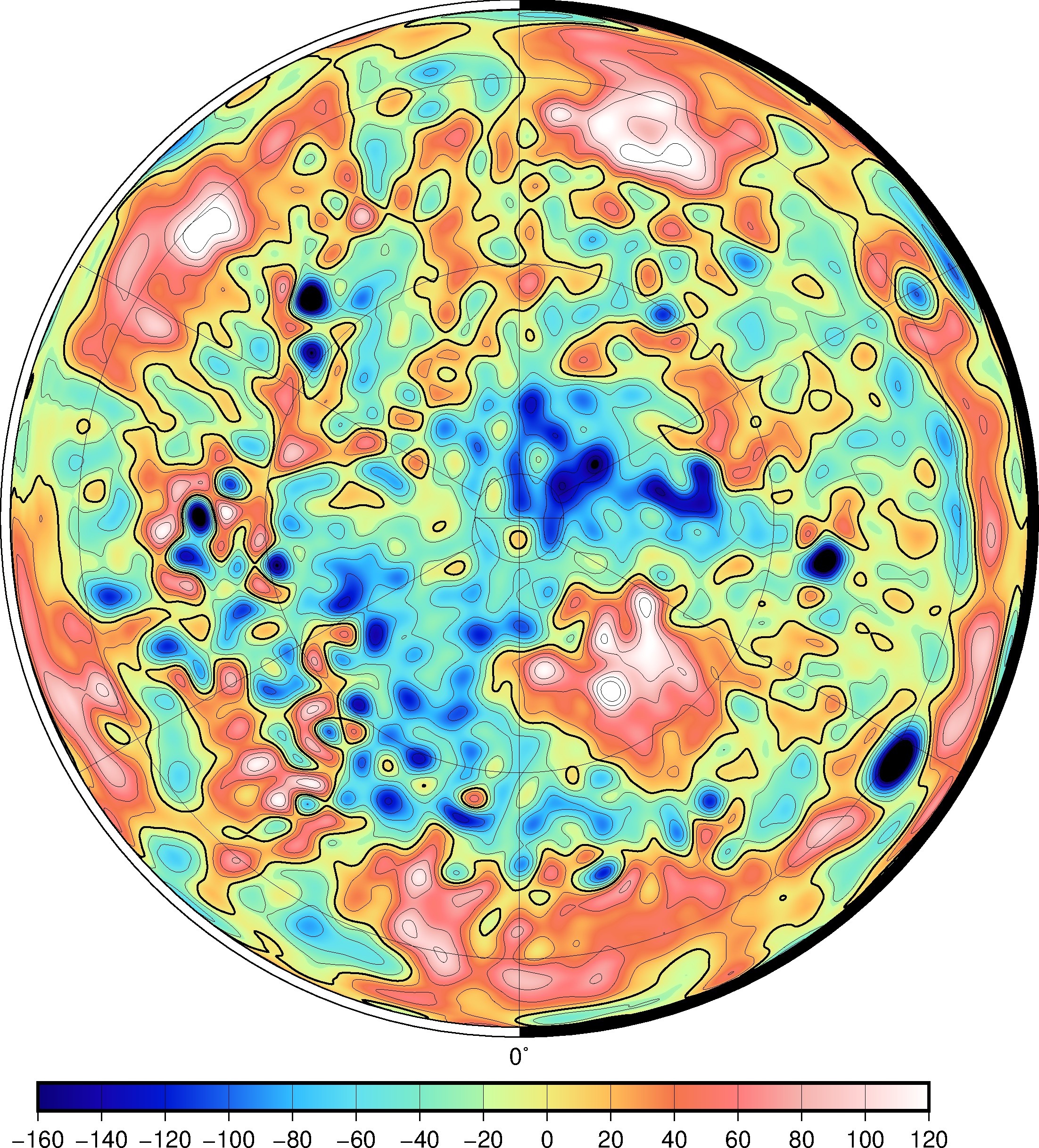 Figure 4. Map of free-air gravity anomaly (mGal) of the gravity field HgM008 in an orthographic projection for the northern hemisphere. 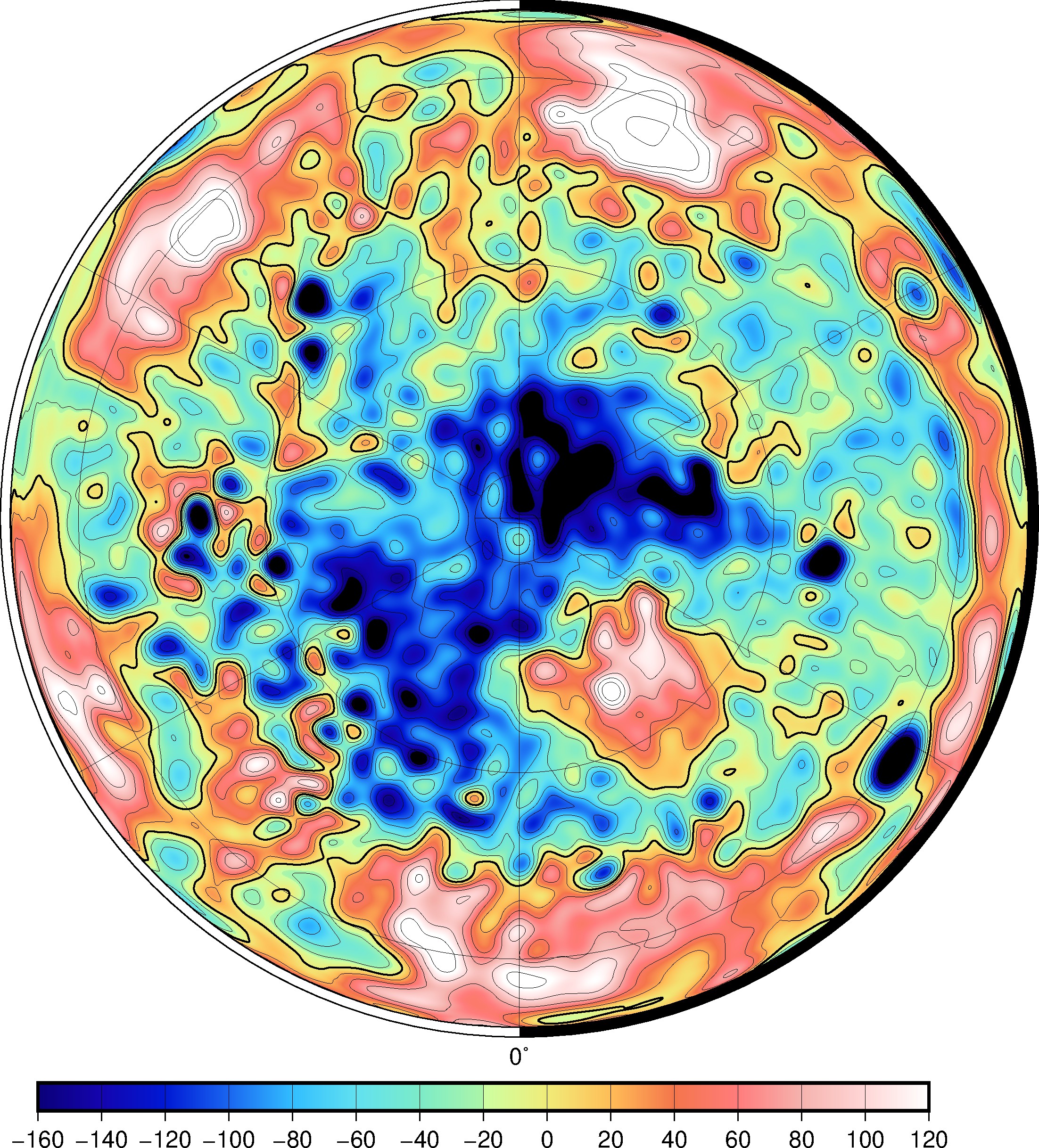 Figure 5. Map of free-air gravity disturbance (mGal) of the gravity field HgM008 in an orthographic projection for the northern hemisphere. 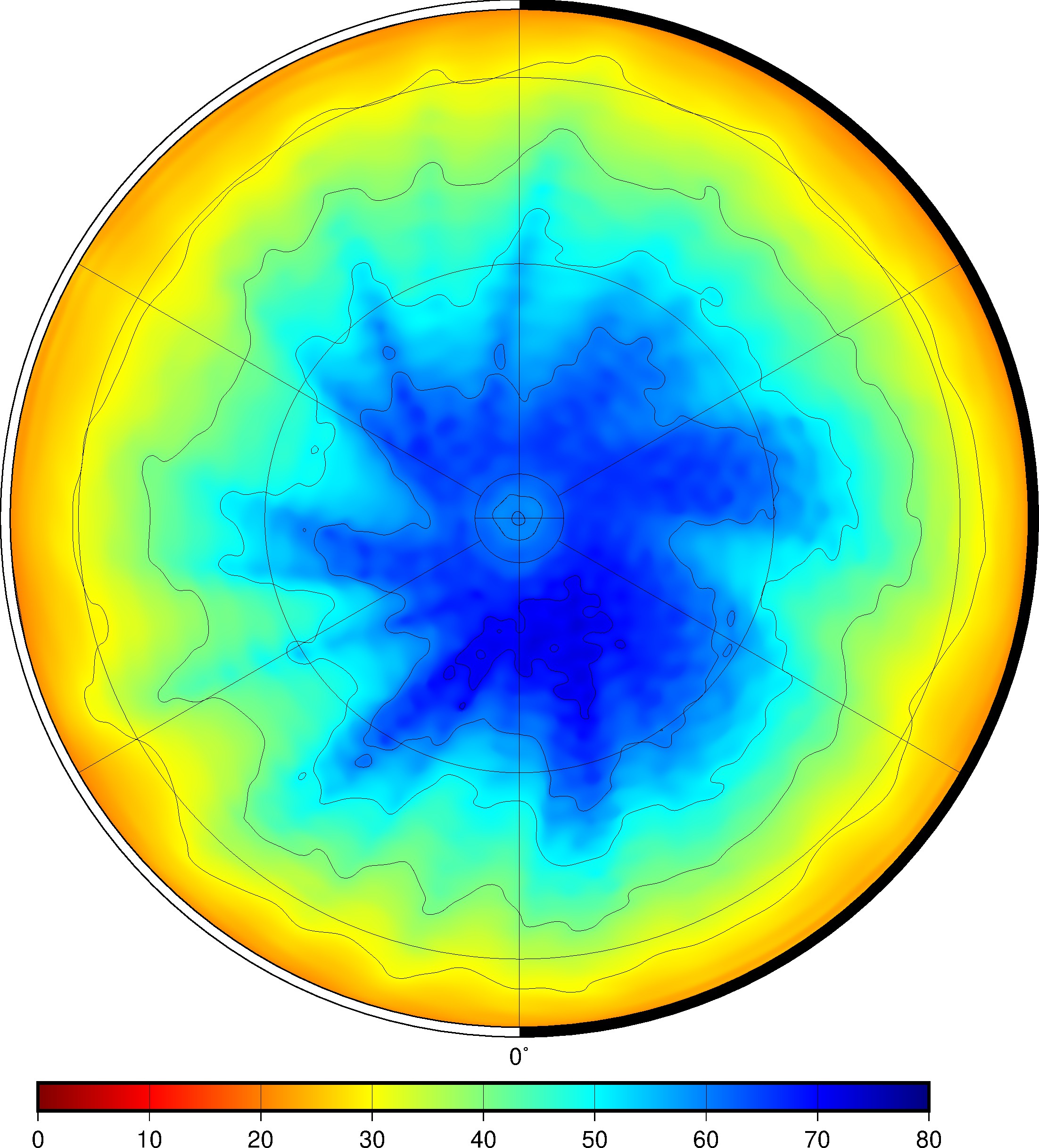 Figure 6. Map of degree strength of the gravity field HgM008 in an orthographic projection for the northern hemisphere. 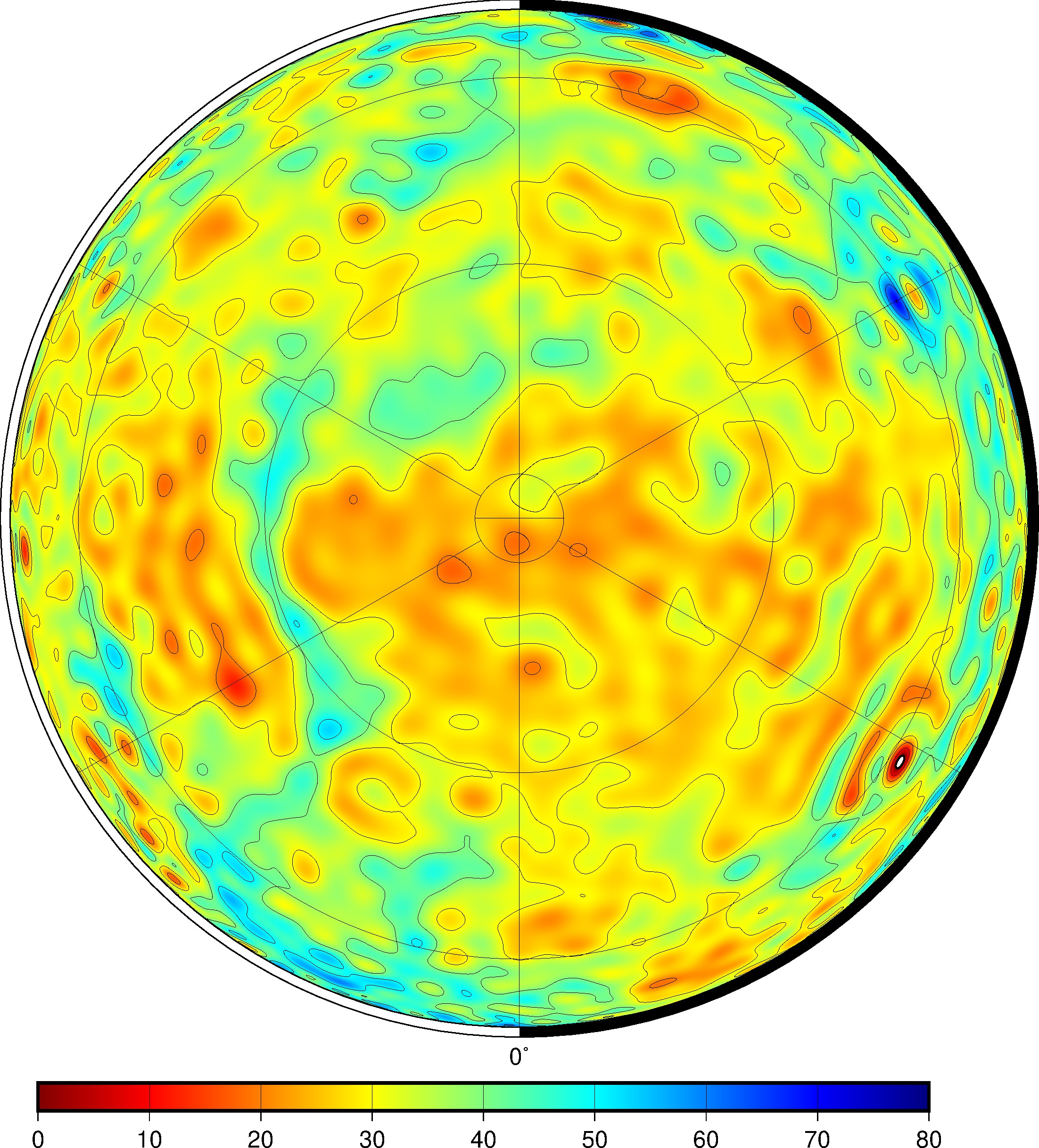 Figure 5. Map of crustal thickness (km) of the gravity field HgM008 in an orthographic projection for the northern hemisphere.